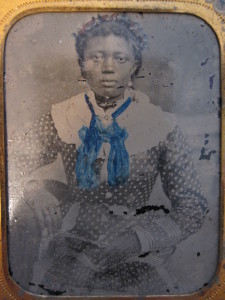 An outstanding African American tintype photo measuring approximately 2 3/8 x 1 5/8 inches behind glass in a larger half case behind glass attributed to American photographer George A. Jeffers (NY, NC, SC, and GA). Brass matte is marked “JEFFERS” on lower center of matte. Rare color tinting on head decoration probably by photographer with primitive scarf quite possibly done by the family after the photograph was taken. Note the interesting necklace beads. Probable origin is SC or GA; tintype process was patented in 1856 and became popular in 1860. Possibly free African American during pre-emancipation. See Jeffer’s locations below. Thanks for looking.

George A. Jeffers began his daguerreian career in Troy, N.Y.; he appears to have migrated southward over the years, winding up in Savannah, Ga., in 1859. Research indicates that it was the same George Jeffers who operated in Troy and in several places in South Carolina; it is possible that it was a different Jeffers who operated in North Carolina and later in Georgia, but not likely.

The partnership of Jeffers and Doty took daguerreian rooms in Winyah Hall, Georgetown, S.C., in February, 1856. A month later, Jeffers had located in Charleston, at the corner of King and Market Streets, no longer in partnership with Doty. He advertised ten years experience, and cited his previous gallery in Troy. He closed his “Star Gallery” for the summer while he traveled, and re-opened it in December, listing at least eight “artists” he then employed. Among these artists was a Professor Lafeyette, employed in late 1856 and early 1857. Jeffers left Charleston by 1857, and probably continued his southward journey. In 1859 he was listed in Savannah, Ga., as Jeffers & Co., on Market Square over Zogbaum & Co. In 1860 he was listed in partnership as Jeffers and Brown (R.H.) on Market Square between St. Julian and Bryan Streets. He lived on York Street.