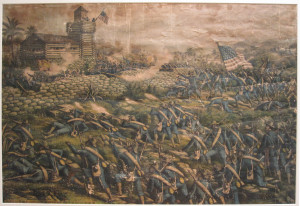 An original matted color lithograph depicting the charge of the 24th & 25th African American infantry and rescue of the rough riders at San Juan Hill, July 2nd, 1898, measuring approximately 18 x 26 inches attached to paper backing with loss and creasing as pictured. Thanks for looking.

The Battle of San Juan Hill (July 1, 1898), also known as the battle for the San Juan Heights, was a decisive battle of the Spanish-American War. The San Juan heights was a north-south running elevation about two kilometers east of Santiago de Cuba. The names San Juan Hill and Kettle Hill were names given by the Americans. This fight for the heights was the bloodiest and most famous battle of the War. It was also the location of the greatest victory for the Rough Riders as claimed by the press and its new commander, the future Vice-President and later President, Theodore Roosevelt, who was (posthumously) awarded the Medal of Honor in 2001 for his actions in Cuba. Overlooked then by the American Press, much of the heaviest fighting was done by the Buffalo Soldiers.

760 Spanish Army regular troops were ordered to hold the “San Juan heights” against an American offensive on July 1, 1898. For unclear reasons, Spanish General Arsenio Linares failed to reinforce this position, choosing to hold nearly 10,000 Spanish reserves in the city of Santiago.

Spanish hilltop entrenchments, while typically well-concealed, were not all correctly positioned for plunging fire, making return fire at the advancing Americans more difficult. Most of their fortifications and trench lines were laid out along the geographic (actual) crest of the heights instead of the military crest. This meant that the fire from the Spanish troops would have difficulty hitting the advancing enemy when the attacking Americans reached the defilade at the foot of the heights. Once they began scaling the hill, however, the attackers would be in full view of the defenders, who could engage the Americans with both rifle and artillery fire.

Most Spanish troops were recently arrived conscripts. However, their officers were skilled in fighting Cuban insurgents. The Spanish were also well-equipped with supporting artillery, and all Spanish soldiers were armed with 7 mm Mauser M1893 rifles, a modern repeating bolt action arm with a high rate of fire, and utilizing a high-velocity cartridge and smokeless powder. Spanish artillery units were armed mainly with modern rapid-fire breech-loading cannon, again using smokeless powder.

Likewise, the American regular forces and troopers were armed with bolt-action Krag rifles chambered in the smokeless .30 Army caliber. However, U.S. artillery pieces were of an outmoded design, with a slow rate of fire. They also used less-powerful black powder charges, which limited the effective range of support fire for U.S. troops. A small four-gun detachment of hand-cranked Gatling guns in .30 Army caliber was also present.

General William Rufus Shafter commanded 5th Corps of about 15,000 troops in three divisions. Jacob F. Kent commanded the 1st Division, Henry W. Lawton commanded the 2nd Division, and Joseph Wheeler commanded the dismounted Cavalry Division but was suffering from fever and had to turn over command to General Samuel S. Sumner. Shafter’s plans to attack Santiago de Cuba called for Lawton’s division to move north and reduce the Spanish stronghold at El Caney, which was to take about two hours then join with the rest of the troops for the attack on the San Juan Heights. The remaining two divisions would move directly against the “San Juan heights” with Sumner in the center and Kent to the south. Shafter was too ill to personally direct the operations and instead set up his headquarters at El Pozo 2 mi (3.2 km) from the heights and communicated through mounted staff officers. source:wiki