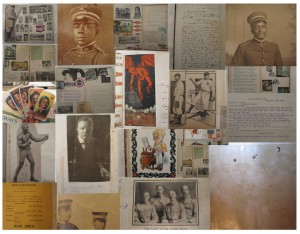 An amazing scrapbook containing miscellaneous ephemera, photographs, and original poem and songs created by James O. Harrison (born 1881), Carbondale, IL, Buffalo Soldier of the 25th Infantry Regiment, Company D. This scrapbook contains approximately 150 pages with over 60 pages of historical memorabilia. The Twenty-fifth United States Infantry Regiment was one of the esteemed African American units of the United States Army known as Buffalo Soldiers. The 25th served from 1866 to 1946, seeing action in the American Indian Wars, Spanish-American War, Philippine-American War and World War II. Mr. Harrison provides documentation and writings of his journey from 1907 through 1909. Mr. Harrison completed his service was honorably discharged on January 29, 1910 based on Ancestry website military records. The scrapbook includes four original photos: two Buffalo Soldiers in military bests, a photo picturing eight Buffalo Soldiers with a last name index, and a small photo of two caucasian soldiers who appear to be officers. Mr. Harrison enjoyed to write and produced one original poem regarding regimental Baseball, one alternate version of Casey at the Bat (Parker at the Bat), and two original songs, all produced during his approximate two year duty in the Philippines. He includes information regarding places he has visited including Philippines, Nagasaki Japan, and Seattle Washington (Ft. Lawton) Much of the information documents his “comings and goings” at these places, especially the Philippines and Seattle. A baseball fan, he includes many clippings and appears to have been a Detroit Tigers fan. Also a great article on a heroic Negro league player who broke his leg sliding into third and still made it to the home plate; a Chicago semi-pro negro team called the Leland Giants vs the Chicago Cubs. Mr. Harrison refers to himself as the “Prince of Poetry of Post of Parang PI Baseball League 25 US Infantry” and makes many notes throughout. A careful investigation would reveal much more as all the information is adhesed to the pages, over writing in some cases, either on the scrapbook or the back of the documents. As the 25th could sport a baseball team that beat white caucasian Major leaguers, you get a glimpse into Mr. Harrison’s circle as he documents some names in his poems and songs. Some of the players mentioned are Jasper (probably Jacques Jasper who played with Negro league Hall of Famer Joe “Bullet” Rogan on the 25th), Parker, Jackson, Mason and Heavy. I have been able to see some of the same last names in the book On the Trail of the Buffalo Soldier II . This gentleman was very Patriotic and has photo prints of Teddy Roosevelt and his four children; he writes out Theodore Roosevelt a couple times in the book.

The hardbound book with spine (but missing spine cover) measures approximately 13 x 8 1/4 x 7/8 inches and the pages are approximately 12 3/4 x 7 7/8 as bound. Condition is very good on some pages to poor on others as described. Please note that some pages are very brittle and changes in condition may occur after this is written and during any packaging and shipping. I have included a description of the information in the scrapbook. I have docmented what is written and have deciphered most of the writing. Grammatical errors have been maintained where applicable. Pages titled PICTURED are posted. If page has detached from binding it is described as such. First picture is a collage made by me based on the contents.

The band came down like the wolf on the fold
with noble intentions in debths of their souls;
they feared no one living that beautiful day
and the first team they attacted was Company “A”.

At 2 in the evening the players lined up
as if they were playing for a golden cup;
and the Band thought doubtless by having the outs
that with “A” Company they would hae theirown routes.

Most of their playing was with Harris in the box
who made whistle through the air like rocks;
hard straights,out,curves,an in curve and a drop
and they all yelled out Company “A” is a sop.

But all of a sudden their courage went down
as “A” Company players were gaining much ground;
this was surprising,-but we all di see
that “A” Company got 5 and the Band only 3.

111 – PICTURED. Two photo print clippings of 38 caucasian American songsters and one listed clipping of the 38 as an index. Some names include Pryor, Lloyd, Lauder. Below Harrison writes “A few of our American list songster.” One song apparently printed in ink and Harrison writes “James Harrison Co D 25 Infantry” on bottom. James Harrison can be seen through on top verso. The song is printed as follows:

“What are the bules blowing for?”The Sergeant-Major said
“Is it Guard-mount or Reveille or is it Dress-Parade?”
Oh Cooke he says its ten o’clock, and Wilson says its six
And Eastman says “well I’ll be dogged – we ‘re in an awful fix”

Aint that a shame, a measly shame,
That old clock ‘s doing some “stunts” again;
It took up the “Ragtime” ’till we all missed Drill time
But you bet your bottom dollar, we never missed “Chow-time”

Oh Turner says why go to bed when officer of the day?
You hardly get your winkers closed when there goes Reveille.
And Young, he says “Lock up that clock, its gained twelve hours this day
When I got up this morning I found ’twas yeserday”

Oh what is Reedy sprinting for acoming down the line?
All out of breath he gasps it out-“I’m trying to make up time”
“Its Reveille” Saleeby thought as he rolled out of bed,
But strange to say to his dismay-they played Sick-call instead.

Oh Wade he left his happy home to go to morning drill
And heard the bugles blowing for “Tattoo” upon the hill
When along came Captain Helmick he was followed close by “Taps”
All this at Cottabato by official time – perhaps.-

note: On the Trail of the Buffalo Soldier II lists a Frank Eastman under Phillipines (general, i.e. not a specific city as some soldiers are noted). I had a chance to briefly review this book and although the book does not list every Buffalo Soldier, it is very valuable. A more detailed analysis may identify some of the names with the city listings. No Cooke listed but three Cooks, Isaiah, Julius, and Samuel. William Turner and William A. Turner listed. Four with the last name Young: Charles, Douglass, John W., and Roman. Reedy may be a nickname. Cosley and George Reed listed. Photograph has name Reed listed as does signed card. It is interesting to see the lyric “Aint that a shame.” This song may have been grammatically edited based on comparing the grammar with Harrison’s other writings.

122 – PICTURED. One blue ink poem titled “Parker at the Bat” attributed to James O. Harrison which is a modified version of Casey at the Bat (By Ernest Lawrence Thayer taken From the San Francisco Examiner – June 3, 1888). The version is not materially changed but the most important information about this is the players names. There is Parker, Heavy, and Jasper (pitcher). Jacques Jasper was a very successful pitcher for the 25th and is mentioned playing with the great Rogan in Honolulu. CAPS indicates Mr. Harrison’s variation.

IT LOOKED EXTREMELY ROCKY for the MALABANG nine that day,
The score stood TWO to SIX, with AN ENNING LEFT to play,
SO when JACKSON died at SECOND, and MASON did the same,
A PALLER WREATHED THE FEATURES OF the patrons of the game.

A stragling few got up to go, LEAVING THERE the rest
WITH that hope THAT springs eternal WITHin the human brest,
FOR they thought if only PARKER could but get a whack at that,
THEY WOULD put up even money now with PARKER at the bat.

But HEAVY preceded PARKER, AND LIKEWISE SO DID JACK,
And the former was a POODLING AND the latter was APACK,
So ON that stricken mulitude A DEATH LIKE SILENCE sat,
For there seemed but little chance of PARKER getting to the bat.

But HEAVY let drive a single to the wonderment of all,
And the much despised JACK, tore the cover off the ball.
And when the dust had lifteR, and THEY saw what had occurred,
There was JACK safe at second, and HEAVY HUGING tRird.

Then from THE GLADEN MULTITUDE WENT UP a JOYOUS yel,
It rumble IN the MOUNTAIN TOPS, it rattled in the dell,
It STRUCK UPon the HILDSIDE and REBOUNDED on the flat,
NO STRANGER IN THE CROWD COULD DOUBT, TWAS PARKER AT the bat.

There was ease in PARKRERS manner as he stepTed into his place,
There was pride in PARKERS bearingS and a smile ON PARKERS face.
And when responding to the cheers,he lightly dofed his hat,
FOR PARKER MIGHTY PARKER WAS ADVANCING TO the bat.

FIVE HUNDRED eyes (eyes WRITTEN) WAS on him as he rubed his hands IN dirt,
Five HUNDRED tongues applauded when he wiped them on his shirt.
Then while the pitcher JASPER ground the ball into his hip,
Defiance GLEAMED in PARKERS eye a sneer curled PARKERS lip.

And now the leather cover sphere COMES hurling through the air,
And PARKER stood watching it in haughtER grander there,
Close TO the sturdy batsman the ball Enheeded sped,
That NOT my stIle said PARKER, Strike 1 the umpire said.

From the benches,black with people went up a mufled roar,
Like the beating of storm waves on a stern and distant shore,
Kill him Kill the umpire shouted some one on the stand,
And it likely thAy hav’eD killed him, had not PARKER raised his hand.

With a smile of Christian charity great PARKERS viSsage shoRn,
He stilled the risEing tumult he bade the game go on,
He signaled sir Green, once more the sphROID flew,
But PARKER stil ignored it, and the umpire CRIED xtriCk two.

Fraud cried the madden HUNDRED and echo answered fraud,
But one scornful look from PARKER and the audience was aUed.
They saw his face grow stern and cold, they saw his musSes strain,
And they knew that PARKER wouldnOt let that ball go by again.

The sneer IS GONE from PARKERS lip, HIS teeth IS clenched in H hate,
He pounds with cruel violence his bat upon the plate,
And the pitcher holds the ball, and now he lets it go,
And now the air is shatered by the force of PARKERS blow.

O” somewhere in this favored land the sOn is shining bright,
The band is playing somewhere, and somewhere hearts IS light,
And somewhere men are laughing and SOMEWHERE children shout,
But there no joy in MALABANG, mighty PARKER has struck out.

“Oct 6th-09 To Whom It may consern Pvt James Harrison Co D 25 US Infy Rgt Completed a tour of two years duty as a soldier in the US Army Staion and served in the Philipines Islad at Parang Mind Seven hundred and fifty miles south of Manila PI Island of Luzon The 25 Infy Regt in witch he is serving was relieve on Sept 1th-09 and sail for Zamboangpa arrived Sept 7th taken on four companys and Band 25 Infy head Quaters and Command sail on eavening of 7th for Manila arrived in Manila Sept 9th lay over in with? Manila unitl eavening of 10th sail for Vuartine? station 3 hours run and arrive a 3 oclock sailing for Nagasaki japan on next day Sept 11th at noon 5 days at sea weather bad arrive Nagasaki on Sept 16th stop over Two days and departed for Seattle Wash. on the 18 Inst? Weather condition for two weeks bad on the 8 day from Japan past Island near Nome Alaska 2 thousand miles from Seattle 2 hundred miles from Nome 3 thousand miles from Japan Arrive Seattle on Oct 5-09 departed from Transport Sheridan and taken station Fort Lawton Wash on same Inst Total time? between Parang PI? Island of Mindinao and Seattle Wash Twenty five days and 8 hours In witch four days 18 hours Wash? consume? for stop over Condition of weather bad for twenty two days and 9 hours